The butterfly is known for undergoing one of the most fascinating transformations in nature. The change that takes place is not just physical but spiritual. The caterpillar does not simply turn into a butterfly; it undergoes a profound transformation on all levels. This process can teach us about our own potential for rebirth.

The Meaning of a Butterfly’s Life Cycle

Humans often compare the life cycle of the butterfly to our own transformation and comeuppance in life: it is the tale of an underdog getting what is owed or the ugly duckling blossoming into the beautiful swan. While these are each beautiful comparisons, butterfly symbolism runs much deeper than this.

Let’s take a look at the butterfly’s life cycle. It starts when the humble caterpillar hatches from its egg. Eating leaves for nutrients and getting bigger and bigger, the caterpillar focuses on surviving with such a squishy little body.

In this sense, the creature that flies out of the pupa is not the same one that entered. The butterfly has a new diet, anatomy, and way of life. Despite this, butterflies have shown tendencies to remember their experiences as caterpillars, demonstrated by tests conducted by Dr. Martha Weiss at Georgetown University.

So what does this mean for us spiritually? That butterflies aren’t meant to represent the transitions we make throughout life but the ones that come after. Like the caterpillar, what we are experiencing in this life is only a temporary state of being. Death is not the end, but simply our pupa stage, in which our spirits grow from the life lessons we’ve obtained.

Whether you’ve led a life of trauma or experienced unconditional love, it was necessary for your human experience. This has a lasting impact on your spirit as it chooses its next form. From there, it’s believed you are reincarnated as a higher being into the life cycle your spirit needs to learn its next important lesson.

Just as a caterpillar undergoes a radical transformation to become a butterfly, so too can the human mind experience a spiritual awakening. This awakening is often compared to the butterfly’s emergence from its chrysalis, as it represents a complete transformation from one state of being to another.

During a spiritual awakening, the individual may begin to see things in a new light and view the world from a completely different perspective. This can be both an exciting and unsettling experience, as the person begins to question their previously held beliefs and assumptions. The spiritual awakening process can be likened to shedding your old skin and emerging as a new creature.

Like the butterfly, those who have undergone a spiritual awakening often find themselves with a new sense of perspective. They may adopt an entirely new lifestyle due to the lessons learned and the transformation that has occurred.

The butterfly is a symbol of resurrection and transformation in Christianity. This can be seen in the story of Lazarus, who was brought back to life by Jesus after being dead and buried for four days. Similarly, the butterfly undergoes a remarkable transformation during its life cycle, emerging from its chrysalis as a beautiful new creature.

The butterfly also symbolizes spiritual rebirth and the journey toward salvation. In Christian art, butterflies are often depicted hovering near figures such as Mary or baby Jesus, symbolizing their purity and divinity. Overall, butterflies play an important symbolic role in Christian belief and tradition.

Modernly, many Christians believe that an angel takes the form of a butterfly to guide a soul to heaven; Catholics believe that the butterfly is a spirit awaiting its days in Purgatory.

Among the Iroquois tribe, a butterfly landing on someone is seen as a sign of good luck. In Navajo culture, the act of catching and releasing a butterfly is used as a way to offer thanks to the spirit world. In some cultures, butterflies symbolize transformation and rebirth, serving as guides for departed souls on their journey to the afterlife.

Despite their positive associations in folklore, many Native American tribes view butterflies with discretion due to their role in pollination and agriculture. Some tribes saw butterflies as potential threats to crops and would actively hunt them during planting season. A black butterfly landing on someone’s windowsill may be interpreted as an omen of sickness or famine.

In ancient Greece, the transformation of a caterpillar into a butterfly was paralleled to the soul’s journey after death. Psyche, the Greek word meaning soul or spirit, even shares its name with the butterfly-winged Greek goddess of the soul.

According to myth, Psyche was given four impossible tasks by Venus, which were eventually completed with the help of ants and winged spirits (possibly butterfly-like creatures). In one version of the story, Psyche is transformed into a butterfly after completing her tasks and allowed to join the gods on Mount Olympus.

Despite being depicted as delicate, butterflies symbolize the endurance and perseverance that aligns with Psyche’s journey of overcoming challenges to find true love and become immortalized among the gods. Thus, the symbolism between Psyche and the butterflies provides a deeper understanding of the story and its themes.

In many cultures, the butterfly is seen as a messenger from the dead. They are often considered a sign of hope and new beginnings, but they can also represent loss and grief. If you see a butterfly fluttering around you, it might be time to pay attention to the message it is trying to bring you.

Though we commonly see butterflies as creatures of beauty, they also have a more nuanced and complex role in our lives and cultures. Just as the caterpillar must go through its dark stage in the chrysalis before emerging as a butterfly, so too do we have to go through dark times in our lives before we can emerge transformed on the other side.

Trust that the process is taking you exactly where you need to go – and eventually – you will spread your wings and fly. 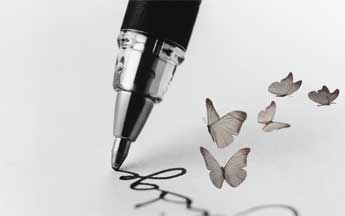